“Maracayeros were victims of repression for hours this Saturday – the citizens protested against the repression and honored Fabián Urbina.” That’s how the Venezuelan newspaper El Nacional introduced an article about an opposition protest that occurred in Maracay city, Aragua state, in June 24, 2017.

The article goes on, richly adorned with videos and photos of “citizens” suffering the “repression” of Venezuela’s Bolivarian National Guard. But there’s a part of the article which would immediately seem a little weird for journalists: “Users reported there was an irregular situation in the headquarters of the pro-government collective ‘Otro Beta’, where a fire presumably started.”

The article definitely would be different if written by college professor Ysbel Mejias. On that evening, not much before “a fire presumably started” in Otro Beta’s headquarters, she – which is a member of the collective – was in the building with her husband and nine-year-old child. “There was a comrade who stayed in there, to guard it. He had to exit through the backdoor, and that was the only way, because they entered as a herd. He told us he saw ten or twelve of them”, Ysbel tell us about the guarimbeiros that invaded the building and reduced it to ashes in that evening. “Some of those who invaded were people who used to go watch musical performances in the space”, she regrets.

Created on 2011 in the city of Maracay, Otro Beta annually organizes a music festival that in 2016 had a public of 50.000 people. The group’s headquarters, now in ruins, was used by other collectives for meetings, and had a recording studio for independent artists, stage, restaurant and bar.

“With the bar we generated direct and indirect jobs, when there was a need for security or sound staff. In the case of the restaurant, we also generated jobs for comrades who were part of the collective and didn’t have an income at the time. And there were jobs for the youngsters, for the young people who live in the streets and use their art as a way of expressing themselves; graffiti artists, rappers, jugglers”, Ysbel tells us. “It’s the development of arts and culture as revolutionary expressions. That’s what we intend to do.”

Mariano Garcia, also a member of the collective, says there’s no doubt about who was responsible for the attack. “It was a violent call by the country’s opposition that resulted in the attack and looting of the space, the destruction and burning of our collective.”

“We were the only cultural space, at least in Aragua state, to be attacked in such manner. Why? I believe it was for the impact we had culturally. We helped youngsters with no political distinction. Politics was not and it will never be a requirement to help them. But I believe, yes, that our political standing – which is out there, we never hide it – as well as the locality of the space, may have been elements for the attack, because we are in a very commercial region, a zone in Maracay where the residents aren’t sympathetic to our political standing.”

The street protests against Nicolás Maduro, called by opposition coalition “Democratic Unity Roundtable” (MUD) and cheered in the international media, are called “guarimbas“.

The idea Venezuela lives under a dictatorship, endorsed by the headlines, was stamped by months with the imagens of “repression.” It’s frequent to see articles about guarimbas mentioning those who “died during the protests”, without revealing, though, who were the dead or in which circumstances they have died.

The site VenezuelaAnalysis checked and counted 126 dead during the protests. 14 of them were caused by Venezuela’s authorities, 23 were victims of the opposition’s violence, 8 died due to roadblocks (mainly in traffic accidents), 3 were killed by pro-government civilians, 14 died in lootings, 3 were accidentally killed and 61 didn’t have the reason established. Even opposition leader Leopoldo López, in an article in NYT, acknowledge that the weren’t dead only on one side.

It is no coincidence that the invasion and burning of Otro Beta’s headquarters wasn’t reported by international media (even though it was mentioned by the country’s vice-president in his Twitter account), and it is definitely no coincidence that El Nacional defined it as an “irregular situation” that presumably occurred. In Tovar, Bolívar and Lechéria there were similar incidents on the headquarters of the United Socialist Party of Venezuela (PSUV).

To reborn from the ashes

“Obviously it is harder, more complex, but it isn’t impossible. Before we had this space we promoted activities. We will have to make more efforts, but as I said it is not impossible”, says Mariano when asked about the future.

“Guarimba is not rumba”, said a graffiti painting done by the opposition that we saw three days before the visit to Otro Beta’s ruins, in La Salle Avenue, near Venezuela Square, in Caracas. It is not, indeed. For this year’s festival, called “Fenix”, the Otro Beta collective choose a very appropriate leitmotiv: “to reborn from ashes”. 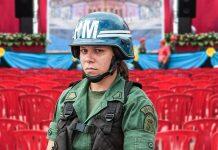